In this release, we continue to improve our existing tools, add new features and change the look and feel of the Screenberry graphical user interface to be more user-friendly and convenient. For instance, the Media Player widget has been completely redesigned to provide users with better playback control through a more convenient interface, and allow the easier organization of workflow.

We are thrilled to be the first in the industry to fully integrate TouchEngine from Derivative.

This integration is accomplished with the TouchEngine node that can be added to the Screenberry node graph and provides easy and intuitive control over TouchEngine instance creation, TOX file loading, parameter value retrieval, etc.

The TouchEngine node can have TOPs and CHOPs inputs/outputs depending on the TouchDesigner project setup. Additionally, it contains a descriptive error logging system that makes troubleshooting easy and fast. 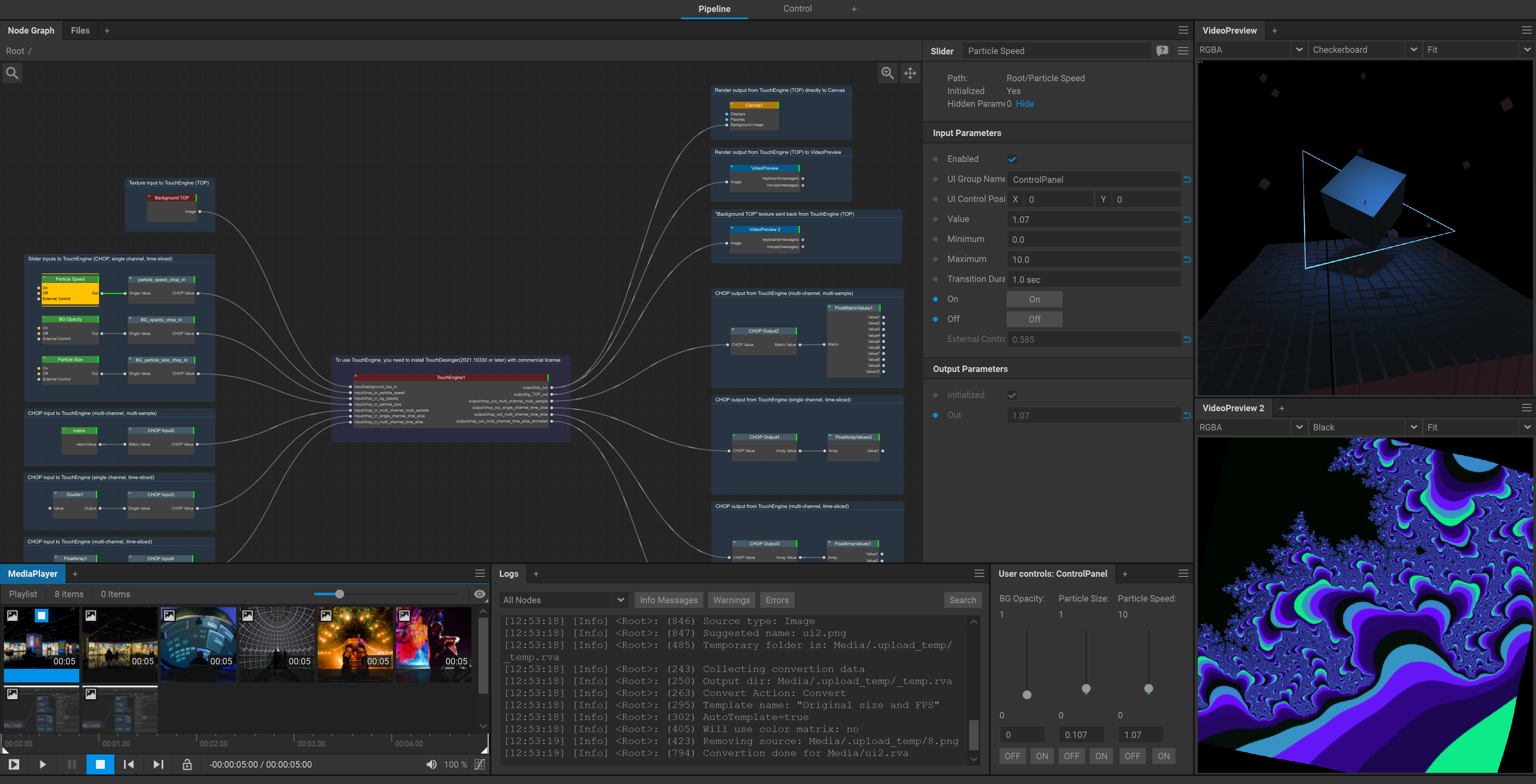 Video streams obtained from TouchEngine can be displayed as a texture, or as a composition layer. Incoming data streams can be used to provide Screenberry with information like tracking coordinates, object properties, DMX values, touch events, or any other real-time data. It is also easy to send a video stream or numeric values from Screenberry nodes to TouchEngine for processing and receive the resulting output back.

Support has been added for the Mo-Sys (F4 protocol) precision camera tracking that has become an industry standard for use with XR stages, LED volumes, and green/blue screens in virtual production and content creation for live broadcasts, film, and game cinematics. The new Mo-Sys F4 node, which allows you, for example, to synchronize camera movement in the Screenberry 3D Scene using Mo-Sys camera tracking data. 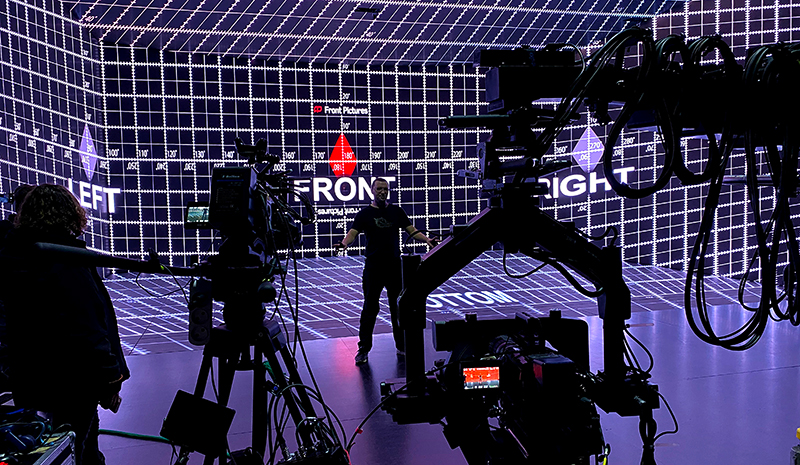 The Screenberry project system has been redesigned to provide more flexibility and security. Now, work folders and project folders are separated from the executables and can be located anywhere on the user’s hard drive. The project folder includes the main configuration file, media folder, node resources folder, assets folder for text, objects, CSV files, databases, and other non-media resources.

The web-based control panel has been developed to control Screenberry playlist playback and work of user-defined widgets remotely, from any computer, tablet or smartphone. A custom platform-independent web interface with HTML 5 support makes it possible for multiple users to operate the server via the web browser. 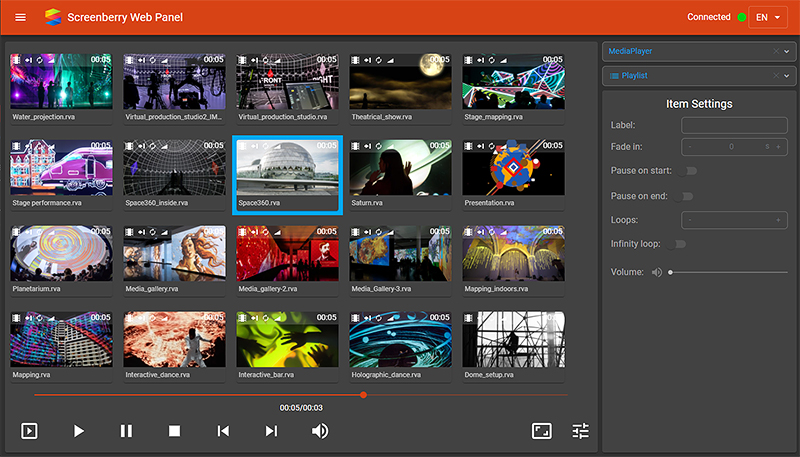 The new Chroma Key node has been added that enables the green screen removal and despill.

The new MQTTClient node has been added allowing Screenberry to connect to any MQTT broker over a network.

The new Comment Area element has been added to the node graph. It allows organizing a node graph more clearly and descriptively by arranging nodes into notated comment boxes, which is helpful for at-a-glance overviews of a complex node graph’s functionality.

The TimecodeDisplay node now has its own widget.

The Timecode input parameter and the option to Follow Timecode have been added to the NotchPlayback node.

The Notch SDK used by Screenberry (the NotchPlayback node) has been updated to support the 0.9.23 version.

The Disable Alpha Channel option has been added to the media item settings in the Media Player widget.

The capability of triggering media items playback in the Media Player with a button press event in the GUI Panel has been added.

The capability of triggering media items playback in the Media Player on the preset value change event in the Preset node has been added.

The capability of mapping media items in the playlists and timelines to the events sent from the Button node has been added.

A server-side Undo/Redo stack has been implemented for operations in the Scene Editor.

The Scene Editor has been enhanced with 3D gizmos and a grid in the Free Camera view. 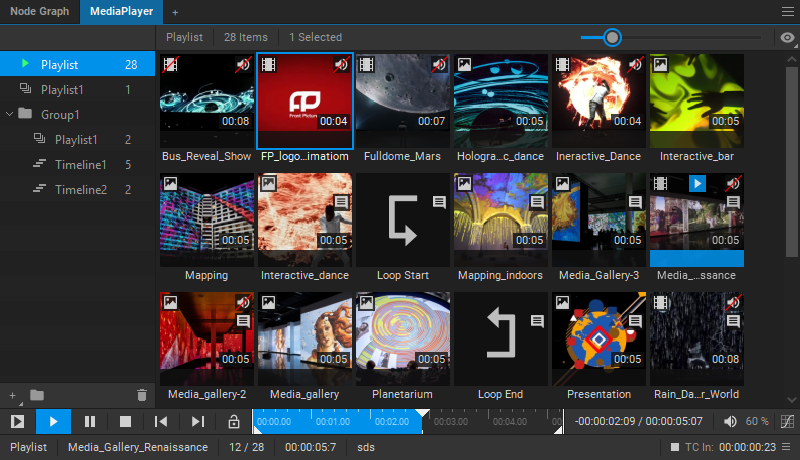 The localization options for Ukrainian and Chinese languages have been added to the Screenberry Panel. The language can be changed in the Preferences > Choose Language dialog box.

Numerous other minor fixes and improvements have been implemented.